One of the most magical moments of a parent’s life is to watch their baby take those first steps and walk on their own.

This is considered as a major milestone in your baby’s life as per doctors.

It also plays as an essential indicator that your baby is having a natural healthy growth and has not missed a milestone.

This milestone is connected to gross motor skills of your baby’s body.

Now you must be wondering what this Gross Motor Skill is or what are Motor Skills?

Well, don’t worry we are here to tell you all that you need to know.

What exactly are Motor Skills?

A motor skill is any intentional movement which involves the usage of muscles to achieve mobility.

In other words it is the ability to use your muscles to achieve the intended movement.

Motor Skills can be divided into 2 types depending on the size of muscles used:

This is the coordination of small muscle movements usually involving the synchronization of hands and fingers with the eyes.

These are used for smaller actions like to hold, pick things up between finger and thumb or wriggling the toes in the sand.

But Fine motor skills aren’t just about fingers and toes, even when your baby uses his lips and tongue to taste and feel objects he/she is using fine motor skills.

This is the co-ordination of large muscle groups like arms, legs, or the entire body.

These are usually used to crawl, jump, sit, walk and almost all major body movements.

These skills are mostly developed during the early part of childhood. They are not easily forgotten in case they are not utilized for a certain period of time.

Did you know that motor skills develop differently in male children compared to female children? 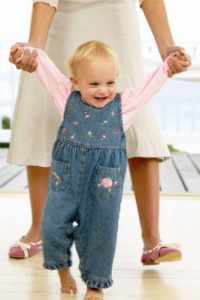 You would be amazed to know that motor skills tend to vary according to the gender as well.

The reason behind this variance has been attributed to the difference in brain structure.

If you wish to understand the ways in which you can develop your child’s motor skills then it is important to recognize the rate (or age) at which these skills tend to develop.

Here is a table of fine and gross motor skills developmental milestones in your child. 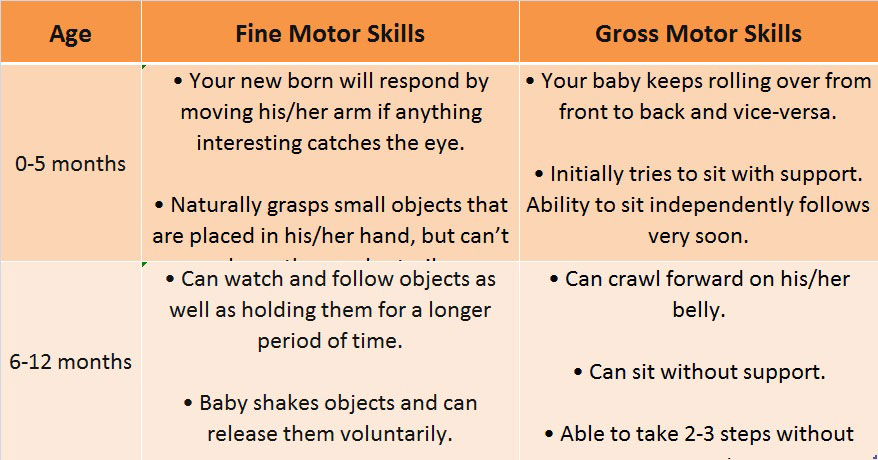 Use these milestones as general guidelines because no two children develop at the same pace and these are average ranges and not exact numbers.

What matters most is that your child progresses from one stage to another at a steady pace.

As a parent you should do everything you can to aid your child’s development and consult a health expert if you think your child isn’t reaching majority of the milestones or your child.

Now that you have read the chart, you know how important it is for your child to build his/her motor skills.

Hence, to help you take up an active role in developing your baby’s motor skills as early as possible we have come up with a list of really helpful tips with scientific explanations for you.

How can you develop your baby’s motor skills?

Here are the top 4 tips:

Your child’s motor skills development depends on various factors that may come into play according to the environment around.

The general observation by various pediatricians is that a baby SHOULD NOT sleep in a prone (lying on stomach or face down) position so as to avoid the risk of sudden infant death syndrome (SIDS).

But, you should avoid extending this general misconception to playtime as well.

Infants should be allowed to play in prone position for their motor skills development else it may lead to poor motor skills growth later.

Various scientific studies have examined the sleep/play positions of hundreds of infants and compared them to their motor skills development.

The major findings are as follows:

These studies were limited to first year after birth in their scope.

Hence, it is advisable that you should vary the sleeping and playtime positions of your baby between prone as well as supine positions.

This plays a vital role in your baby’s motor skills developing normally.

2. Use of Baby Equipment

Parents use equipment like walkers, bouncers or infant-sitting devices to entertain their child.

Some parents even assume that baby walkers can help their child in learning how to walk.

THIS IS A SERIOUS MISCONCEPTION.

Data supporting such benefits do not exist.

One study that evaluated children between 6 and 15 months of age demonstrated that walker-experienced infants sat, crawled, and walked later than no-walker controls, and they scored lower on Bayley scales of mental and motor development.

Some facts about baby walkers:

According to CPSC, in 2011 alone there were an estimated 3,300 injuries among children under age 5 due to walkers, jumpers, and exercisers, down from an estimated 3,700 in 2009.

On average, there is one death per year due to these products based on data from 2007-2009.

Walkers have been under investigation as to how they give rise to burns, broken limbs, concussions, head injuries, skull fractures, and even Death.

In 1999, an estimated 8,800 children younger than 15 months were treated in hospital emergency departments in the United States for injuries associated with infant walkers.

Population surveys suggest that there may be as many as 10 times more injuries that are sufficiently minor that they are treated in physicians’ offices or do not require medical attention.
These injuries were mostly caused due to tripping over of the baby over any obstacles that the infant walker couldn’t cross, babies leaning outside the walker and walker passing over the stairs. 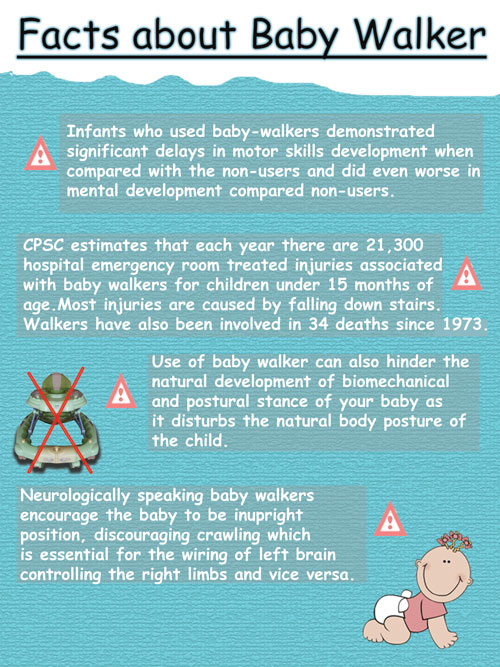 Numerous scientific studies have analyzed hundreds of babies to learn about the positive (or negative) effects of using such equipment.

The findings are as follows:

The American Academy of Pediatrics recommends a ban on the manufacture and sale of mobile infant walkers and also it’s banned in Canada since 2004.

Hence, it is advisable TO NOT USE ANY BABY WALKERS AT ALL.

A supportive and stimulating environment involving human interaction is far more useful for the effective development of your baby’s motor skills.

More than often parents and caregivers hold the baby in a way that restricts all movement of the baby. 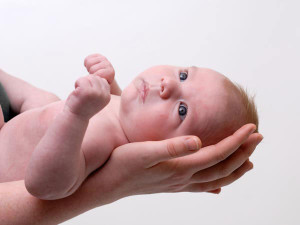 This is usually done with good intentions for the safety of the child.

But findings show that actively controlling head movement by placing a hand behind a baby’s head is harmful in the long-term.

The development of head control begins during the prenatal stage.The movement of the head is one of the first movements made by a newborn.

This movement is crucial for the exploration of a whole range of early behaviors.

Head control and movement expands the field of vision of your baby.

This allows the infant to explore and become more aware of the surroundings.

Improved use of vision leads to better body control and the eventual learning of more complex behaviors like crawling, turning etc.

What science says about Head Control?

In theory, early head control training is significantly positive for infants. Hence, a couple of scientists embarked on finding out the extent of improvement shown by infants.

The scientists trained 24 babies under the age of 4 months for a period of 3 months. Once the training got over, the results were compiled.

During training, caregivers actively encouraged infants to control their head themselves.

This led to less, or at the very least, passive holding of the head.

Once the infants gained a certain level of control, caregivers pushed the envelope further by allowing infants to control their heads in different situations.

Any such freedom with regards to head control was provided under carefully monitored conditions.

The results showed that the trained infants actively moved their heads more often and for larger distances.

Hence, your baby should be encouraged to support their head on their own as early as possible and given full freedom of moving or turning their head in a safe settings so that the natural development of their neck muscles isn’t hampered.

Some of the more elaborate guidelines are as follows:

Here are some activities that can play a positive role in the development of your baby’s muscles.

Nature by default has gifted immense grasping power to your ever-inquisitive newborn.

All you need to do is to provide the required support and environment for them to learn.

The best gift a parent could ever give a child is his or her precious time.

A healthy positive interaction with parents boosts the growth rate of the child.

Not to forget, the joy you would derive in making a connection with your child that lasts a lifetime.