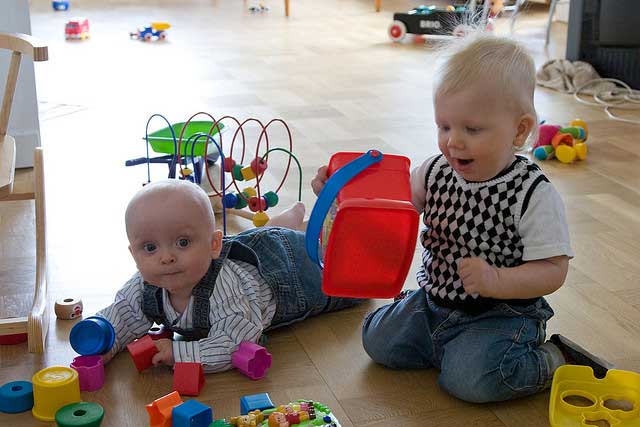 Play is an important part of a child’s life. It helps determine the child’s interests and more importantly it helps develops the child’s social and cognitive skills. Play occurs in certain stages through which the child will slowly go through and grow into. Although there are certain time-frames given as to which stage of play the child is in at what age, it is not fixed and many children go through these stages at their own speed.

The first stage is called unoccupied play or onlooker play. This is when the infant (less than 12 months) only watches as others play and has no desire to join.

The second stage is called solitary play and occurs after 12 months where the child mainly plays by herself/himself or with her/his parents. The child at this stage is mainly exploring the world around him and has no interest in the social aspects of play. The child is always curious at this age and enjoys playing by himself/herself and fulfilling his/her curiosity. This stage normally continues well into the toddlers 2nd year.

The third stage of play is parallel play where a child will play next to another child, with similar toys and in a similar manner but they do not engage each other and continue to play on their own.

The fourth stage is a more sophisticated form of play which involves social interaction and is called associative play which occurs at around 3years. The children share toys and material with each other and generally have more interaction but they tend to engage in different activities of a similar kind. For example they both maybe building houses with the same blocks but they will build two separate structures.

The fifth stage of play is called co-operative play which occurs at around 4 to 5 years. This is the most conventional form of play where children play with each other, sharing toys, interacting, taking turns or role playing and can generally engage in more elaborate group activities such as board games.

The above stages are not very rigid. In fact the first two stages, solitary and onlooker are frequently adopted by older children as well. For example if a child who is new to the group, will engage in onlooker play and join in when invited or wait until he is more comfortable to join in more actively.

The Different Kinds of Play

The kinds of play that is engaged in is also important. Around 3 years of age, children will participate in what is called as ‘functional play’ which includes simple repetitive activities such as skipping or jumping. They are more involved in being active than doing something creative.

Later, at around age 4, they gravitate towards ‘constructive play’ where they set out to build or create something. This shows the increased sophistication in their way of thinking as it involves the child’s problem solving skills and how to fit something in a desired sequence or a pattern.

Even the nature of their imaginative play changes as they grow older.

At around 3 or 4 years, when it is first seen, the imagination is more grounded in reality. For example, they will pretend to eat plastic vegetables as pretend-food. However, as they grow older they might use their imagination more and instead use torn up paper as pretend-rice for the food.